ANNAGHMORE MUSHROOMS IS GROWING WITH £1M INVESTMENT AND 20 NEW JOBS

Lurgan-based Annaghmore Mushrooms unveiled its state-of-the-art premises on Friday as part of a £1 million investment in the business.

With demand for locally produced mushrooms spiralling, the independent family-owned business has recently increased staff numbers from six to 16 and plans to grow that number by a further ten.

The County Armagh facility, which was founded by mushroom grower Eamon Murray in 2006, markets and distributes top quality locally grown mushrooms throughout the UK and Ireland.

The mushroom crop range includes brown, button, closed cap, flat and Portobello varieties, grown by a team of specialised growers known collectively as Northway Mushrooms, which are proving popular with consumers who cannot get enough of what is now recognised as a ‘super-food’. 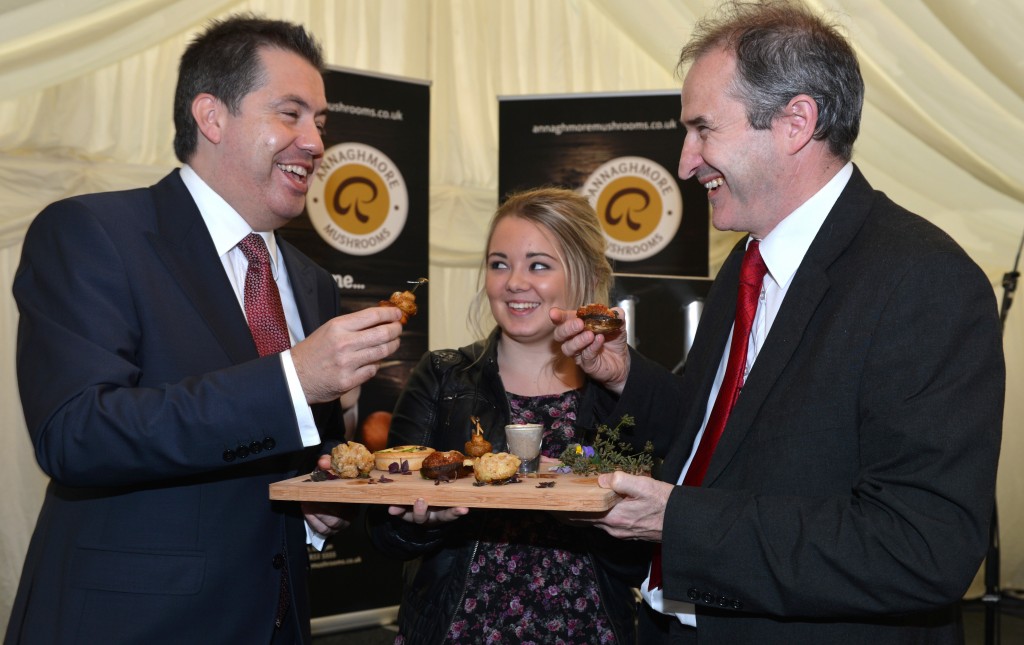 In response to this demand, the company has invested more than £700,000 into new technologies and quality processes to improve its cold chain supply – the most important element of which is a high tech pack-house which has an advanced cooling system to keep the product fully chilled within an hour of picking. The company investment was supported by grant assistance of £286,000 by the Department of Agriculture and Rural Development through the EU Processing & Marketing Grant Scheme.  Annaghmore received additional support from Invest NI.

“This investment is crucial in maintaining the quality and freshness of the product for longer, resulting in an extended shelf life,” Eamon Murray said today.

The mushrooms are sorted, graded, packaged, labelled, chilled and prepared for dispatch from Annaghmore’s new pack-house.

Investment is ongoing according to the Annaghmore Mushroom’s Managing Director, who said: “We are constantly investing in modern, efficient equipment and packaging and are committed to ongoing improvement as we grow our business in response to the growing demand for our mushrooms.”

The home market is strongest for Annaghmore with 95% of its products being distributed in Britain and Northern Ireland with five per cent supplying retail outlets in the Republic of Ireland.

The business is continually striving for success, though, and has recently been accredited as a member of the British Retail Consortium, which means its standards qualify it for supplying to multiples.

Eamon Murray added: “Having our business audited every year by one of the most demanding organisations in the world, which is recognised as a leading authority on food safety and hygiene standards in the UK, ensures that every aspect of our business is run to the highest standards achievable.” 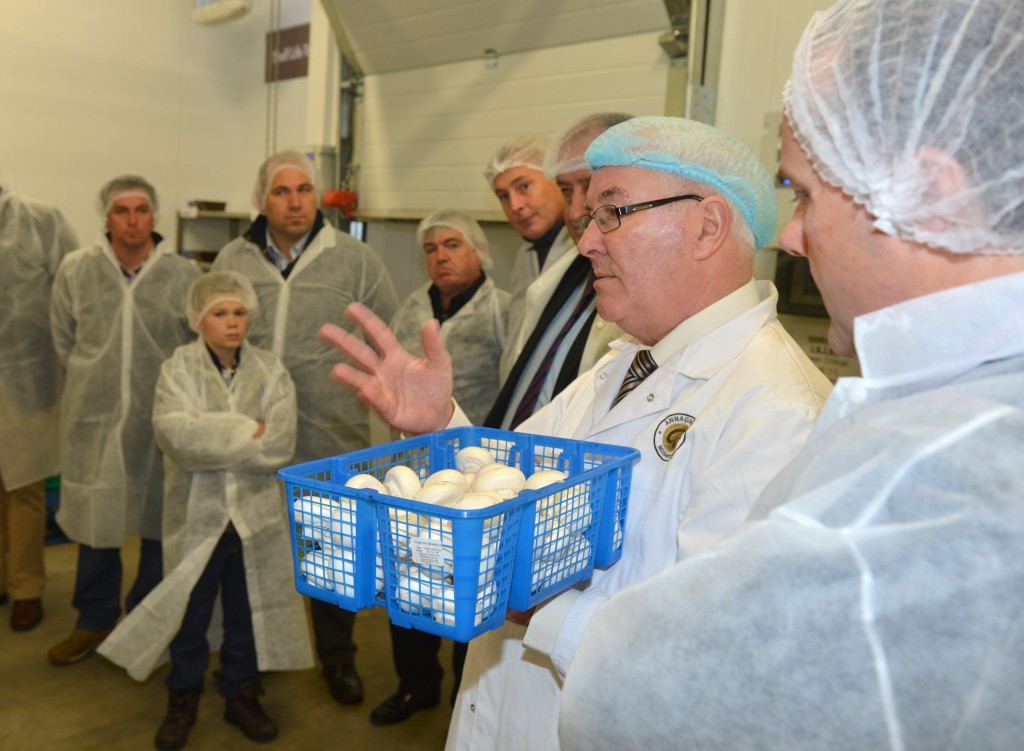 Annaghmore’s new premises which includes a pack-house and growing facilities were officially opened today by David Small, Deputy Secretary of the Department of Agriculture and Rural Development and was attended by representatives from the local agri-food sector and delegates from the All-Ireland and UK Mushroom Conference and Trade Show who were visiting mushroom farms in Northern Ireland for the first time in their conference programme.

“It has been a pleasure to officially open the new headquarters and growing and processing facilities today at Annaghmore Mushrooms. It is tremendous to see a local company going from strength to strength and supplying not only to the local market but also across the UK.

I am delighted that the Department of Agriculture and Rural Development has been able to assist this growth through the EU Agriculture and Forestry Processing and Marketing Grant Scheme.” 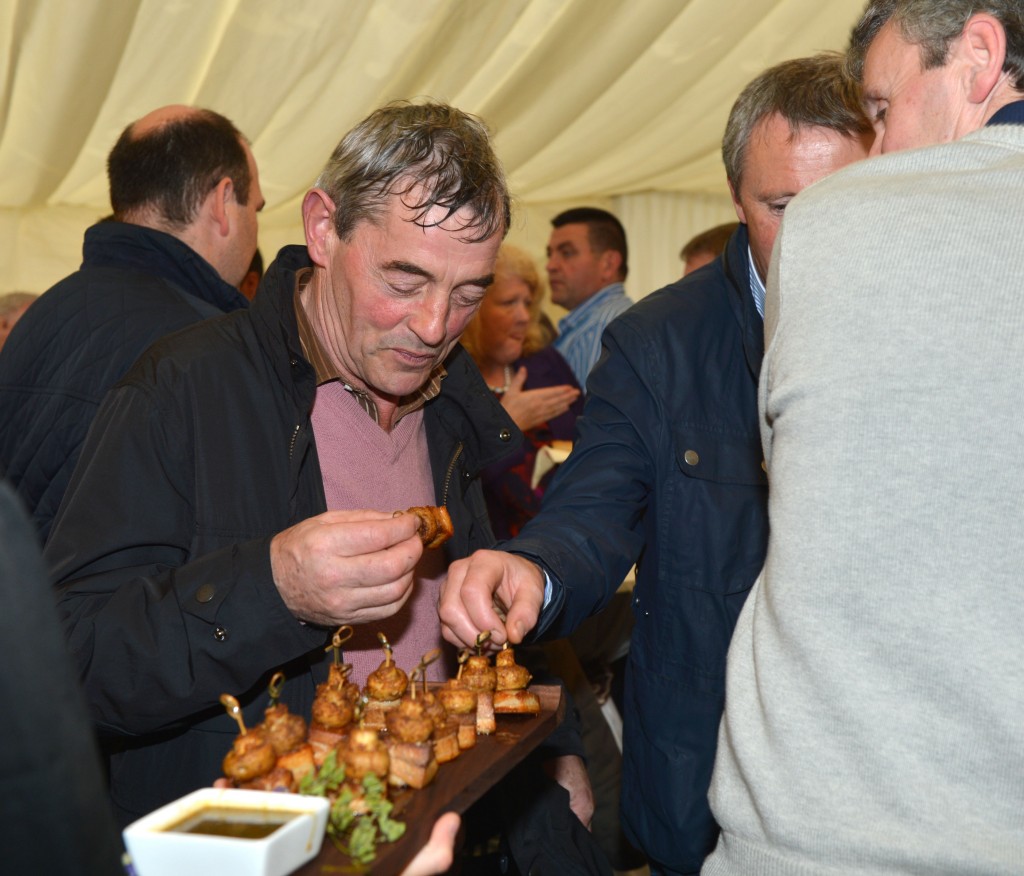 Financed with the aid of the European Union